Meet our new product. Nutritional and convenient, only 100 calories per serving.

Gongura pacchadi (chutney or relish) is quintessentially Telugu cuisine. Telugu people call it Andhra Matha (mother Andhra) due to significance in their day to day diet.

In the Bodo Tribe of Assam too, 'Gongura' called as 'Mwitha' is used frequently. The Bodos believe that intake of sour helps in fighting the scorching summer heat and prevents illness.

It is also grown in Tripura, Arunachal Pradesh (north east region of India) and also some parts of triabl Chittagong Hill Tracts region in Bangladesh. It is a very popular green vegetable in Chakma community and it is known as "Aamelli". Similarly, Gongura is popular in Tamil Nadu as well, and is called pulichakeerai (புளிச்சைக் கீரை) in Tamil. It is popular in North and Central Karnataka cuisines as "Pundi Palle/Punde soppu (ಪುಂಡಿ ಪಲ್ಲೆ/ಪುಂಡೆ ಸೊಪ್ಪು)", and is regularly eaten with Jollad (Jowar-Sorghum) flat breads. The famous combination with pulichakeerai is Ragi Kali/Ragi Mudde, which once used to be a regular food for the people in villages (since these items are easily available).

In Marathi, it is called Ambaadi (अंबाडी). And is specially prepared to a stew and served to goddess Mahalakshmi/Gauri during her annual festival which falls on three days in between the ten days Ganesha Chaturthi festival in Maharashtra. It is known as Pitwaa in Hindi, Taka bhendi or Khata Palanga in Oriya, Kotrum in Jharkhand, Mestapat in Bengali, Amaari in Chhattisgarhi, Pandi/Pundi in Kannada, Anthur in Mizo, Sougri in Manipuri, Sankokda in Punjabi, Aamelli in Chakma, Mwitha in Bodo, Kenaf Leaves in English, and Chin Baung in Chinese. It is a summer crop, and the hotter the place, the more sour the leaf gets. 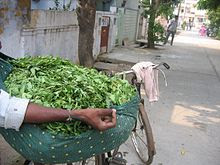 Sold on a street in Andhra Pradesh 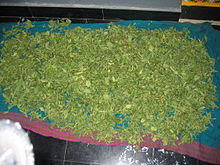 Gongura and calabash is extremely popular with the Telugu community in South Africa. It is also eaten by Acholi and Lango people in northern Uganda, where it is known as malakwang.

Some more popular curries and pickles made with gongura are as follows:

Sign up to get the latest from the farm, recipes, and more…